Skip to main content
Ariel Phenomenon explores an African extraterrestrial encounter witnessed by over sixty schoolchildren in 1994. As a Harvard professor, a BBC war reporter, and past students investigate, they struggle to answer the question: “What happens when you experience something so extraordinary that nobody believes you?”

As of Dec. 25 Available on iTunes, Google Play and Amazon Prime Video Direct 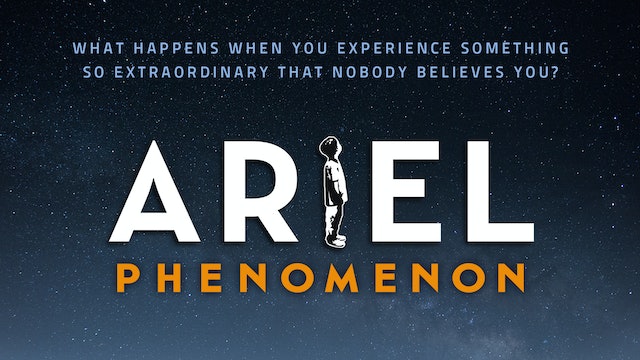 What if you had a story so extraordinary that nobody believes you?

Ariel Phenomenon is about the search for acceptance as told through accounts of an African extraterrestrial encounter witnessed by over sixty schoolchildren. In 1994, Ariel School students witnessed an unidentified craft land outside their schoolyard. Twenty-five years later, this incident is still fresh in students’ memories. They continue to search for answers - and the courage to speak their truth.

In this first feature documentary about the Ariel School UFO incident, a young woman returns to her school in rural Zimbabwe - the place that, at the age of nine, shattered her reality.

We meet a respected BBC war reporter who reluctantly covered the event, ultimately leading him to risk his career on the one story that haunted him the most.

Jeopardizing his reputation is Pulitzer Prize-winning Harvard psychiatrist Dr. John Mack, whose validation of the witnesses made this mass-sighting impossible to ignore.

Watch what critics are calling "one of the most incredible documentaries you’ll ever see", and "a film that appears destined to enjoy stellar ratings on the Tomatometer".

“I enjoyed the film greatly. It puts the issue in a touching, emotional place.” – Dan Aykroyd

“An understated and deeply moving perspective… a potent study of how corrosive to one’s spirit the denial of truth can be.”
– Simon Foster

“Nickerson’s tenacity has managed to produce a solemn, restrained, and challenging addition to the UFO corpus, one which should rightfully command global audiences.”
– Billy Cox, Life In Jonestown

“It left me inspired and awestruck, and that’s how I hope it leaves you.”
– Linda Cook, OurQuadCities

“The most effective story told on the subject that I have ever seen.” – Douglas Trumbull

“Worth every second of the wait.” – Ryan Sprague

“Ariel Phenomenon is powerful, life-affirming, and brought me to tears.” – Josh Boone

To review the film, visit https://www.rottentomatoes.com/m/ariel_phenomenon

Right-click this and copy the link address.

Watch on your Television

Watch on your Computer